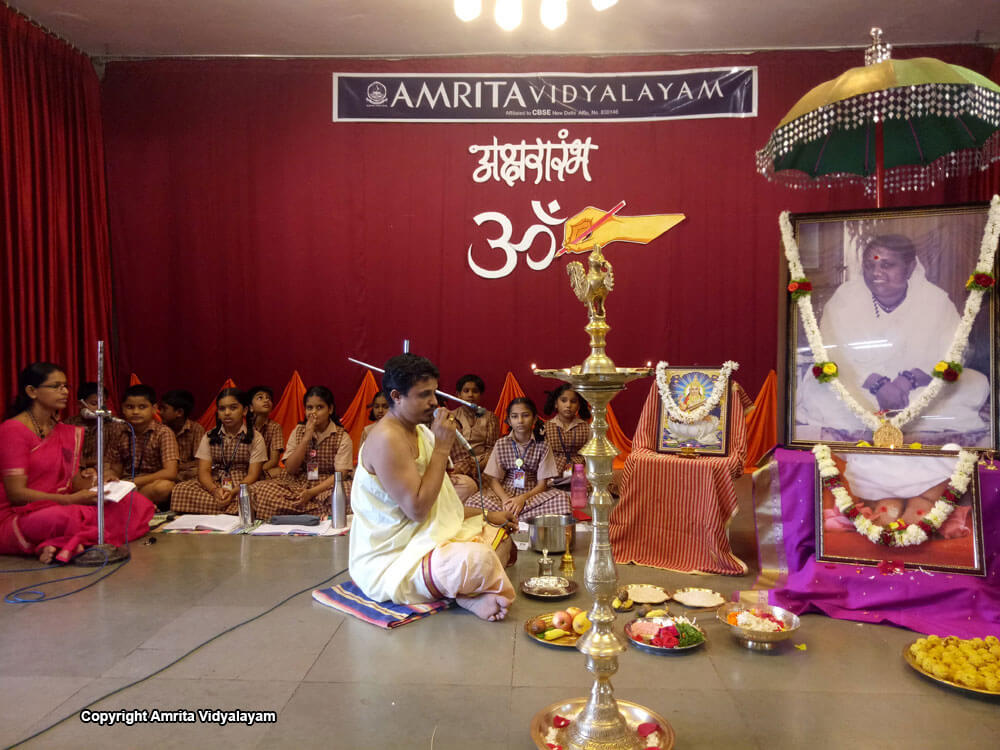 The Akshara Arambha ceremony for the academic year 2019-20 was held in a very traditional manner at our Amrita Vidyalayam on July 4, 2019 for the new students of Lower Kindergarten. The programme commenced at 9:00 a.m. in Amriteshwari Hall in the presence of Senior Principal Mr. Ramachandra Bhat, Vice Principal Mrs. Anupama Rao and Coordinator Mrs. Shobha Rani. This is an auspicious function where the child is given initiation to receive formal education with the sacred Akshararambha ceremony. Parents bring their children to Goddess Saraswathi in order to make them capable of receiving knowledge from our institution.

The programme was hosted by Mrs. Nayana Rajath, and opened with prayer followed by lighting of the lamp. The Vice Principal welcomed the gathering. The special guests for the programme were the parents of the children, and they were florally welcomed to the programme as well. This was followed by the sacred ceremony of Ganesha Pooja and Saraswathi Pooja which was led by Mr. Ganesh, a faculty member of the school. The Vice Principal lit the lamps that were brought by the parents of each child, symbolizing the dispersal of knowledge by the Guru. Mr. Ganesh then proceeded to guide the parents to perform Saraswathi Pooja with utmost devotion and dedication for the benefit of their children.

Then the traditional ritual of Akshara Abhyasa was performed with great reverence to Goddess Saraswati. Parents placed their children on their laps, and holding the hand of the child, they made them write ‘OM’ with a turmeric stick on a plate of rice. The primary school students sang bhajans led by Mrs. Nalini. Finally, Vice Principal Mrs. Anupama Rao addressed the parents, speaking about Amma’s life and the blessed feeling of being part of Amma’s institution. Teaching children values, ethics, and culture is the goal of Amrita Vidyalayam schools, and this was achieved right from the beginning with the Akshara Arambha ceremony.

The programme came to an end with Mrs. Naina Shetty expressing gratitude to the gathering.