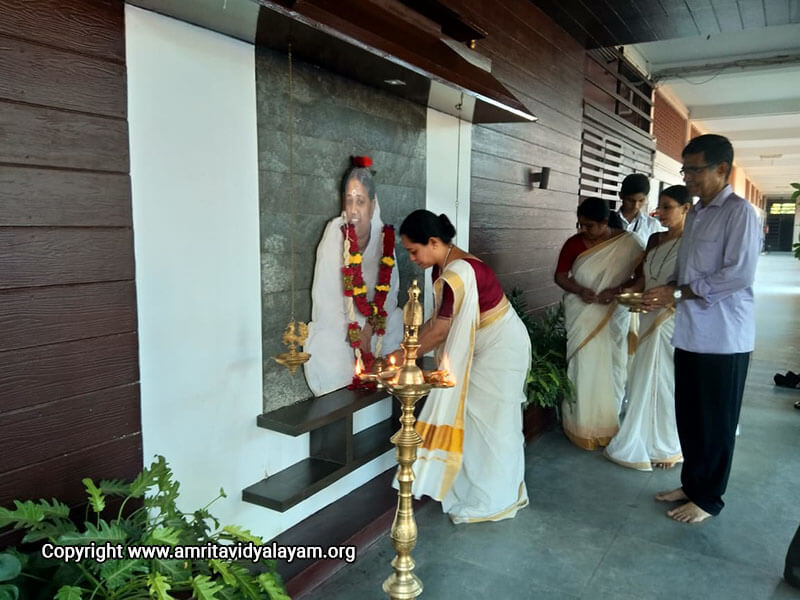 The 71st Republic Day of India was celebrated with grandeur and a festive mood at our school on January 26th. The Chief Guest of the day, Dr. Bharathi Prakash, School Correspondent Brni. Mangalamrita Chaithanyaji and Mr. Dilip were escorted by the Senior Principal Mr. Ramachandra Bhat and Vice-principal Mrs. Anupama Rao to the flag post to hoist the flag, following which the National Anthem and Flag Song were sung by all with pomp and pride.

The programme began with the lighting of the lamp and prayer to seek God’s blessings. Tribute was rendered to Dr. B.R. Ambedkar by offering flowers to his portrait. The guests took their seats, the Chief Guest was introduced by Mrs. Shruthi Rao and the gathering was welcomed by Vice-principal Mrs. Anupama Rao. The students then presented several activities such as reading out the Preamble of the Constitution, patriotic dances, English and Hindi speeches, mono-act on Bhagat Singh, quiz to showcase the talents of tiny tots, etc.

The co-curricular achievements of the Houses were appreciated and felicitated by the dignitaries by presenting the shield to Anandamayi House which had excelled with the highest score for the academic year 2019-20. The Siri Kannada exam rank holders at the taluk, district and state levels were also felicitated. Mrs. Kalavathi and Mrs. Usha were honoured with certificates for the same as state level recognition, and our school was awarded for being adjudged the Best School at the State level. The Principal and the Correspondent were also felicitated with certificates for the same.

The Chief Guest Dr. Bharathi Prakash addressed the gathering expressing her joy to be part of the event, and was overwhelmed as she received positive responses from the students when she posed questions to them. She appreciated the children and the atmosphere of Amrita Vidyalayam School. She urged the children to remember the need to contribute our share for the development of our society, and reminded them that when each person does their bit, it would lead to the greater good of the country.

Senior Principal Mr. Ramachandra Bhat delivered his thoughtful speech by making everyone realize their duties and responsibilities towards their country. He urged everyone to strive towards working hard and bringing glory to the country. The vote of thanks was given by Mrs. Kavyashree, and the grand event concluded with Shanthi Mantra. Sweets were distributed to all, and sweet memories remained as all dispersed to go home.